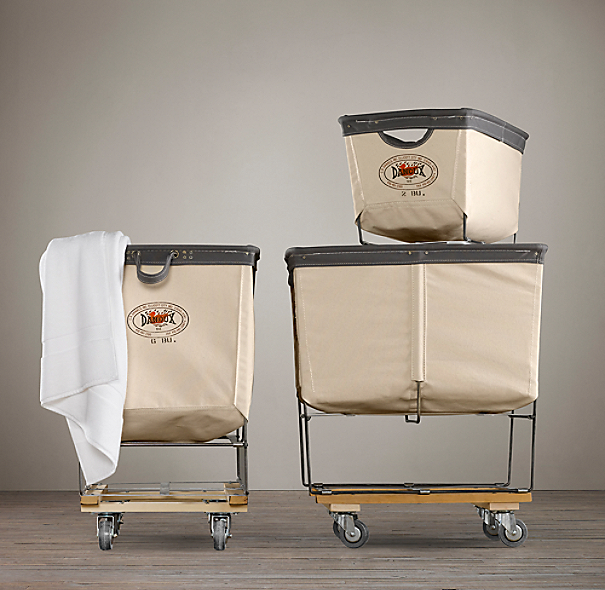 The Boy and I are a perfect fit for each other. Most days, we are like yin and yang. I’m fast, he’s slow. I wake up early, he stays up late. I’m loud, he’s quiet. He’s big, I’m small. I run ahead, he hangs back to see how things play out from afar. Everything I know I understand in words, words, words, but he’s all images, and puzzles, and system specs. I’ve learned that a rough sketch is the best way to get my point across. The point is, we balance each other. Most days.

Other days, it seems like our respective compulsions and idiosyncrasies line up perfectly and form a unifying obsession. Let me tell you a story…

When we moved out of our house in LA, we left our laundry hamper in a pile of other free stuff on the curb. It wasn’t a bad hamper, and it was still in decent shape, but there was nothing exciting about it (I know, duh, it’s a hamper), and The Boy and I had reached that critical mass stage of moving, where packing one more thing would likely have resulted in a city-wide killing spree. It was 10$ at Target and it wouldn’t fit in the car, so it went. We’d buy another one when we got there.

So for the first few days in Portland we were using empty Home Depot boxes for all our dirty clothes, until we finally made it to Bed, Bath, and Beyond. As we wandered the aisles in search of a hamper, we were horrified. They were all brutally ugly wicker monstrosities patterned in strange granny patterns like pussy willow branches and butterflies. Another store, we agreed. We’d find one somewhere else. But as we were checking out with our other purchases, I spotted my hamper. It was one of those huge industrial canvas carts, hidden underneath the check-out counter, a place for employees to throw returned pillows and suchlike. It was calling to me, with its dirty canvas and giant industrial orange label reading: Dandux. “There it is!” I whispered to The Boy. He agreed: we needed one. Until we got home and looked up how much one of those carts costs, and groaned at the 200$ price tag.

Now, I know that it’s just a hamper, and it’s going in the closet, and it doesn’t really matter but… this is one of those instances where something small sets both The Boy and I in the clear-eyed, cold-blooded grip of obsession.

We tried store after store: Ikea, Target, Bed Bath again. We were heartsick. We couldn’t find a cart for less than a hundred dollars, and all of the other hampers looked so trashy, so cheap, so forlorn.

And then, after yet another fruitless trip to Ikea, The Boy dragged me into Home Goods. I had major Ikea fatigue at this point, I was hungry, and thirsty, and generally being a brat. And then, tucked into the back an aisle like she’d been forgotten, my little cart. The most lovely little mini canvas cart I’d ever seen, with STEELE emblazoned on her face in stenciled letters. On sale for less than half the cost we’d seen online!

So all of this is to say that The Boy and I are quite insane, and we have a very nice hamper.

One thought on “Laundry Cart: A Tale of Woe and Salvation”